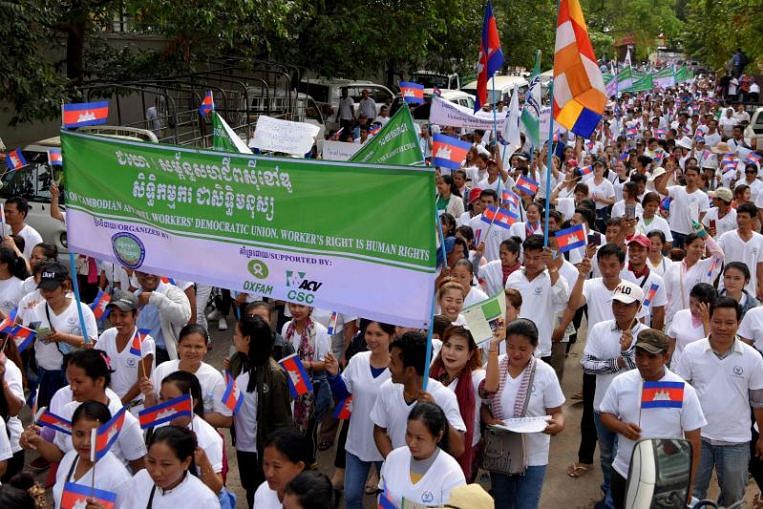 PHNOM PENH (DPA) – Hundreds of Cambodian workers marched on Wednesday, May 1 for about 1 km around a block of the capital to mark International Labor Day, with authorities allowing the short procession after banning the marches of the May 1 for years.

Trade unions and civil society groups calling for the protection of labor rights and the promotion of gender equality gathered in two parks along the shores of Phnom Penh. Organizers said more than 1,000 people were in attendance at each location.

An Rama, regional coordinator of the Cambodian Confederation of Labor, said they hope more than 2,000 workers will walk 3 km from Wat Phnom, a capital landmark and popular tourist destination, to the National Assembly. to deliver a petition to officials, but local authorities did not allow them.

“We want to show our power and that the voice of the workers comes from themselves,” Rama said.

After negotiations between union leaders and the authorities, hundreds of protesters toured a block of a riverside park near Wat Phnom and returned wearing T-shirts of the Labor Day waving small Cambodian flags and holding banners.

Their demands included establishing a minimum wage for all sectors, not just the key garment industry, and increasing the current minimum wage of US $ 182 (S $ 247) per month for garment workers to a living wage of US $ 250, said Rama.

For years, authorities in Phnom Penh have prevented unions and civil society groups that criticize the long-standing government of Prime Minister Hun Sen from holding public marches, saying they would lead to traffic jams and disrupt the government. public order.

In March, authorities prevented hundreds of protesters from marching on International Women’s Day. Labor Day and Women’s Day are public holidays in Cambodia, where Mr. Hun Sen has been leading for over 30 years.

Union activists said on Wednesday they had no recollection of the government allowing Labor Day marches since the 2013 national elections, which were followed by mass protests from the political opposition – which claimed that electoral fraud cost them the ballot – and workers calling for a higher minimum wage.

In 2014, five protesting textile workers were shot dead and more than 40 people were injured by military police in Phnom Penh trying to quell protesters who were throwing stones, the Cambodia Daily reported at the time.

About 1,200 people, including farmers and members of trade unions and civil society, gathered at Freedom Park – which was moved further from the city center in 2017 – according to Keo Chanra, general secretary of the Coalition. Cambodian farming communities.

Chanra said organizers questioned why authorities wouldn’t allow more protests at Wat Phnom or another park in the capital near Wat Botum.

“Because we come together just to celebrate and express our concerns to the public,” Chanra said.

“If we (were) allowed to celebrate the day in public spaces, like Wat Botum and Wat Phnom parks, the place is (…) much more public than here,” she added.

A town hall spokesman said he could not comment immediately and was not reachable later.

Chanra said the workers gathered at Freedom Park had not suffered any disruption from the authorities as they had “already discussed and agreed together (with officials) to conduct the event here.”

“We follow what they suggest to us,” she said.