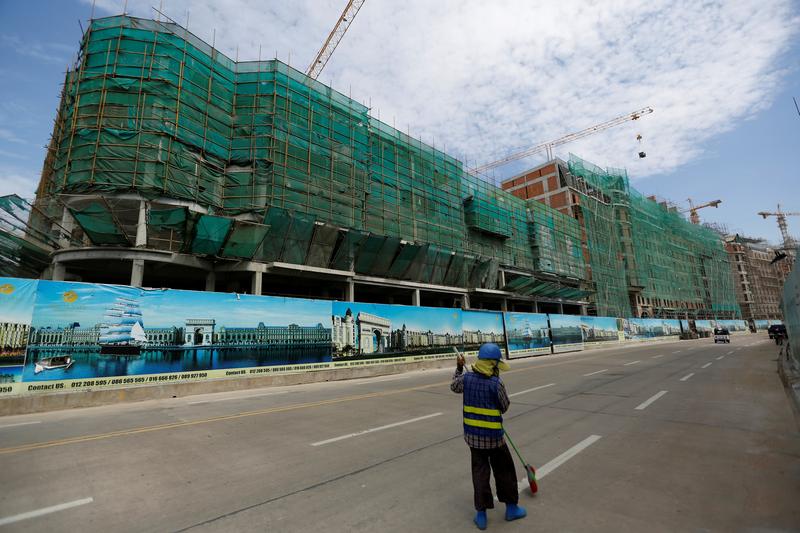 PHNOM PENH (Reuters) – Guo Qirui, 30, says it’s a lonely trip when he returns home to his luxury rented condominium in Phnom Penh, the capital of Cambodia, the country where the Chinese sales leader detail has lived on for almost half a decade.

Guo now lives on Diamond Island, also known as Koh Pich, an area of ​​the city where five condominium projects are underway or have been built. The majority of homes, according to sales agents and residents, are sold to absent Chinese owners.

“Probably half of the completed units have been delivered, but every night it gets dark. No lights are on, ”Guo told Reuters.

A boom in high-end real estate investments by Chinese buyers in Phnom Penh has fueled concerns that they are inflating an already unaffordable market for most Cambodians. The surge echoes the rapid growth seen in China’s metropolitan centers.

The Cambodian capital will have 22,828 luxury apartments by the end of the year, more than double the current number of 8,942 units, according to Ross Wheble, Cambodia country manager at real estate consultancy Knight Frank.

He added that that number, which includes condominiums that sell for an average of $ 3,500 per square meter, will grow to around 30,000 units by 2020. Many may soon have difficulty finding local tenants or buyers who can afford the price.

“In terms of the high-end segment, there is an oversupply,” he said. “It’s a question that everyone asks in terms of sustainability. With Chinese investors buying these units, are they actually going to be occupied? “

Warming political ties between countries and the promotion of Beijing’s Belt and Road Initiative have attracted a wave of Chinese investment to the country, fueling construction activity and a wave of new hotels and casinos. , especially in cities like Sihanoukville.

Developers from countries like South Korea, Taiwan, and Singapore started expanding into Phnom Penh’s condominium industry around four years ago in response to a shortage of such units and a loosening of property laws, said James Hodge, associate director of real estate services firm CBRE Cambodia, adding that the city only had 1,500 such apartments five years ago.

The Chinese started arriving as President Xi Jinping visited Cambodia in 2016 on a visit that resulted in a series of bilateral deals and a pledge to strengthen ties, said Hodge and d other industry leaders.

Among Chinese developers active in Phnom Penh are Guangzhou Yuetai Group 600393.SS and Prince Real Estate, which sells programs of over 1,000 units, larger than those of their overseas peers. Jiayuan International Group 2763.HK and the Guangzhou R&F properties 2777.HK have also purchased land in the city, with the city’s project expected to consist of around 5,000 units, estate agents said.

“As a group, the Chinese are certainly the most active,” Hodge said.

These developers turned to Chinese buyers. Five real estate showrooms that Reuters visited in Phnom Penh, including those marketed by Singaporean and South Korean developers, now outfit their receptions with Mandarin-speaking sales agents.

Sales agents said many buyers came via travel groups organized by agencies and developers, but the hype is such that some, like Beijing-born Jiang Zheming, bought a unit last month as ‘they had never visited Cambodia before.

The 47-year-old engineer said he was drawn to the use of the US dollar in Cambodia, which he considered more stable than the Chinese yuan, as well as the 6% annual rental yield guaranteed by the Taiwanese developer building his 80 square meters. apartment in the center of Phnom Penh.

Another Chinese buyer who asked to identify himself only as Alex, said he bought more than 100 12-story apartments in a downtown condominium. He said he was not worried about being able to rent them, saying it was comparable to being in the business districts of Beijing or Shanghai.

Xi Jinping’s initiative, the Belt and the Road, was key to his decision, he said. “Phnom Penh is the starting point of the initiative, so the development here is booming.

OUT OF REACH, SPECULATIVE

Developer Jiayuan, who said he paid $ 35.6 million for a site in Phnom Penh this month, said the deal was part of his plan to develop quality projects in regions involved in the process. ‘Belt and Road’ initiative and to expand in Southeast Asia.

Guangzhou R&F said in an email that its Phnom Penh project represented its attempt to enter the local market and that it would aim to sell units to local and overseas buyers.

But some townspeople are skeptical, including Diamond Island tenant Guo.

The concern is that resale demand will be low with only a small group of tenants able to afford rents that can cost around $ 1,000 a month for a one-bedroom apartment – out of reach for most Phnom Penh residents. who, according to Knight Frank, have an average monthly household income of $ 600 to $ 700.

CBRE and Knight Frank said there were already signs of a market slowdown. The frequency of new launches declined as landlords lowered their asking rents, they said.

Chrek Soknim, managing director of Cambodian real estate agency Century21 Mekong, said he didn’t think a market downturn would be bad for locals since these apartment owners were mostly Chinese.

“If they can’t sell, that’s okay with us.